LatestProfile
The 2014 coup in Ukraine

The background and implications of the 2014 far-right coup in Kiev, which overthrew the pro-Russian President Viktor Yanukovych, is critical for understanding the current Ukraine-Russia war. This coup was openly supported by US and European imperialism and implemented primarily by far-right shock troops such as the Right Sector and the neo-Nazi Svoboda Party.

It represented the temporary culmination of long-standing efforts by US imperialism to install a puppet regime on the borders of Russia and brought the world a major step closer to a war between the largest nuclear powers, the US and Russia. Ukraine has since been systematically built up as a launching pad for a NATO war against Russia.

The regime change prompted the outbreak of an ongoing civil war in the east of Ukraine, between Russian-backed separatists and the US-backed Ukrainian army, that has claimed the lives of tens of thousands and displaced millions.

In the US, the coup was a catalyzer for an ever more aggressive campaign against Russia and a significant shift to the right among layers of the upper middle class. US imperialism and NATO have funded the Ukrainian state and far-right forces with billions of dollars.

The German ruling class seized upon the coup as a pretext for aggressively stepping up its campaign to remilitarize and justify the crimes of fascist forces. For the first time since the end of World War II, representatives of a German government were seen on photos with avowed Ukrainian neo-Nazis.

Internationally, pseudo-left forces such as the International Socialist Organization (ISO) in the US, the New Anti-capitalist Party of France (NPA), and the Russian Socialist Movement (RSM) supported the coup, falsely proclaiming it a “revolution.” The ICFI and WSWS alone advanced a principled, socialist opposition to this imperialist operation, warning the working class of its dangerous consequences.

Coup in Ukraine: A warning to the international working class

What has seemed unthinkable since 1945 has come to pass: while the US and Germany ruthlessly destabilized Ukraine, fascists have become the decisive force on the ground.

The crisis in Ukraine

The crisis that has erupted in Ukraine following the right-wing coup engineered by the United States and Germany and the intervention of Russia into Crimea has created the most dangerous international confrontation since the end of World War II.

The leaked tape of a phone call between the State Department’s Victoria Nuland and the US ambassador to Ukraine provides an unvarnished expression of the gangster methods employed by US imperialism.

US defends role of Kiev regime and fascists in Odessa massacre

Two years since the Kiev coup

Socialism and the Fight Against Imperialist War

On September 13 and 14, the Partei für Soziale Gleichheit (Socialist Equality Party) held a Special Conference Against War in Berlin. The following resolution was adopted unanimously by the delegates.

The crisis in Ukraine and the return of German militarism

The same ruling circles, banks and corporations that unleashed two world wars are seeking to reprise their heinous crimes.

How the revival of German militarism was prepared

“Democracy” in Ukraine—What is NATO risking a war for?

The fascist danger in Ukraine

For the first time since 1945, an avowedly anti-Semitic, pro-Nazi party controls key levers of state power in a European capital, courtesy of US and European imperialism.

The intimidation and persecution of ethnic and religious minorities within Ukraine has become routine, with far-right elements operating openly as officials of the Ukrainian state.

The killing of a three-year-old demonstrates that far-right forces in Ukraine are being given free rein to carry out targeted political assassinations.

The crisis in Ukraine and the return of German militarism

Appearance of Robert Service in Berlin ends in fiasco

Ukraine and the pro-imperialist intellectuals

The “Open letter on the future of Ukraine” issued by Western academics and foreign policy operatives is a vile defense of the ongoing far-right protests in Ukraine.

The NPA’s support for a putsch it admits is led by fascist groups constitutes irrefutable proof of its passage into the camp of the blackest political reaction.

The struggle against imperialism, fascism and war requires the revolutionary mobilization of the working class on the basis of an international socialist program. Support for the Russian nationalist forces in eastern Ukraine plays into the hands of the fascist forces in Kiev, which are supported by the NATO powers.

The alliance between Canadian imperialism and Ukrainian fascism is most strikingly embodied in the person of Canada’s Deputy Prime Minister Chrystia Freeland. The granddaughter of a prominent Ukrainian Nazi collaborator who was provided refuge in Canada following the Third Reich’s downfall, she is the leading anti-Russia war-hawk in the Trudeau Liberal government.

Nationalism and fascism in Ukraine: A historical overview

The collaboration of Germany and the US with Ukrainian fascists has historical precedents reaching back 100 years.

Anti-Semitism and the Russian Revolution: Part one

This is the first part of a three-part review of a historical study by Ulrich Herbeck on the history of anti-Semitism in Russia from the Tsarist empire until the end of the Civil War in 1922.

What is behind the imperialist campaign over the Crimean Tatars?

In April 2019, the comedian Volodymyr Zelensky is elected president in a massive rebuke of the far-right 2014 coup. While he appeals to anti-war sentiments in the population, Zelensky maneuvers between the imperialist powers. When he tries to   to broker a deal with the separatists in East Ukraine in collaboration with Germany, he confronts mass protests by the far-right. Moreover, he gets almost immediately embroiled in the US impeachment crisis. In March 2020, following the failure of the Trump impeachment by the Democrats, and amidst significant pressure from the far-right, Zelensky reshuffles his cabinet in March 2020, bringing in a large number of officials with close ties to the US that will play a critical role in the escalation of the anti-Russia war drive in the coming two years.

Comedian Volodymyr Zelenskyi won the Ukrainian presidential elections Sunday in a massive repudiation of the incumbent president and the imperialist-orchestrated coup that brought him to power.

The public display of the prime minister’s ties to neo-Nazis is a calculated threat to the working class amid preparations for privatizations and ongoing fighting within the ruling elites over foreign policy.

The public hearings on impeachment have brought to light bitter recriminations within the US ruling elite sparked by the failure of its anti-Russia efforts in Ukraine.

Jason Melanovski•19 March 2021
Capitalist restoration and the IMF: The social devastation of Ukraine

Impoverishing Ukraine: What the US and the EU have been doing to the country for the past 30 years

Neither Washington nor Brussels, which have been economically strangling Ukraine for decades, has ever cared about the well-being, dignity, or sovereignty of its people.

More than a quarter-century after the dissolution of the USSR, emigration continues unabated in Ukraine as workers flee poverty and war.

Despite little health or legal protections, Ukraine’s migrant workers are being forced to search for work in Europe’s farms and factories to avoid unemployment and social destitution.

The policies of the Zelensky government threaten the working class with a social and medical disaster of immense proportions.

Protests against utility hikes in Kiev 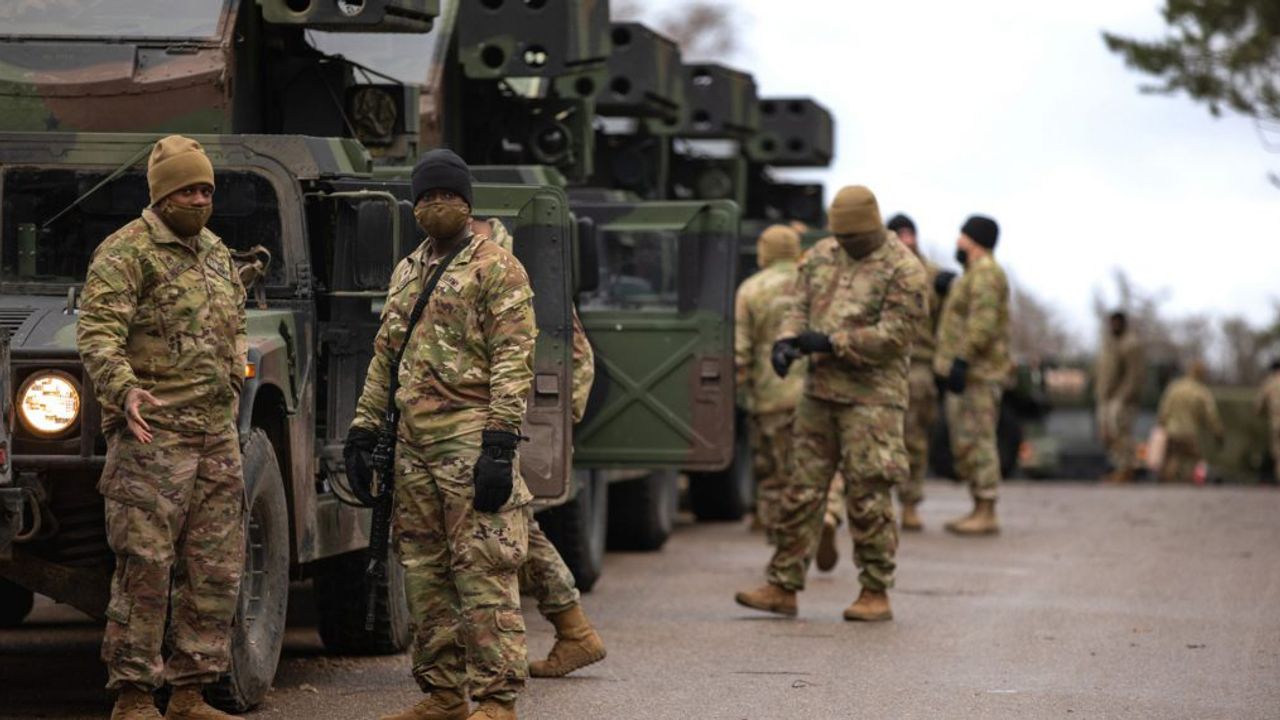 NATO goes to war against Russia

Already substantially armed and with weapons pouring in, Ukraine is the front line in a war aimed at regime change in Moscow and the complete subordination of Russia to NATO.

Statement of the WSWS Editorial Board•28 February 2022

Conflict between US-NATO and Russia over Ukraine threatens nuclear war

Sixty years after the Cuban Missile crisis, the war in Ukraine has brought the world to the point where the exchange of nuclear weapons is a real possibility.

Statement of the WSWS Editorial Board•28 February 2022

Oppose the Putin government’s invasion of Ukraine and US-NATO warmongering! For the unity of Russian and Ukrainian workers!

That the US and NATO are prepared to take the world to the brink of nuclear war, with all its horrific consequences, testifies to the staggering level of recklessness and aggressiveness that now prevails in all the centers of world imperialism.

Stop the drive to World War 3!

Amid a pandemic that has killed nearly one million people in the US and continues to kill more than 2,000 every day, the Biden administration is focusing all attention on an increasingly hysterical campaign for war against Russia.

Statement of the WSWS International Editorial Board•21 February 2022

Who in the Lord’s name gave the US the right? A question for Mr. Biden

This is a question, however, that much of the world would like Biden himself to answer. The “flagrant violation of international law” that Biden accused Russia of perpetrating is precisely what the United States is doing, with Biden directly and personally involved.

In light of the major escalation Monday of the conflict between the United States and Russia, we are republishing excerpts from the 2016 statement of the International Committee of the Fourth International, “Socialism and the Fight Against War.”

Statement of the WSWS International Editorial Board•22 February 2022

Blinken at the UN: A Colin Powell moment

Developments over the past 24 hours make clear that the Biden administration, speaking for dominant sections of the American ruling class, is determined to escalate the confrontation with Russia, even to the point of triggering a world war.

Oppose the US-NATO drive to war with Russia in Ukraine!

The International Committee of the Fourth International (ICFI) and the World Socialist Web Site unequivocally oppose the reckless drive of Washington and its NATO allies to instigate a war with Russia, using the fraudulent claim of an imminent invasion of Ukraine as a pretext.