The conditions facing hundreds of thousands of people fleeing to Europe to escape escalating wars across the Middle East and Africa are an indictment of European society. Camps lack sufficient basic resources, such as water, electricity, food, and medical supplies and operate exclusively with the assistance and donations of volunteers. In many European countries, the camps are deemed “illegal.”

The refugee camp in Grand-Synthe, France, is one of the very worst places for refugees to be stranded. An estimated 2,500 people live there, and around 50 new refugees, often families including children, the elderly, and pregnant women, arrive every day. Froom here many attempt a crossing into England, hidden on trucks, hoping for asylum there. 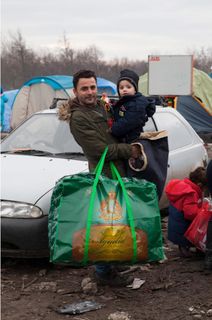 WSWS reporters interviewed Joel Sames, a volunteer in one of these camps.

On health conditions in the camp, he stated, “MSF is here but the problem is the waiting times are very long. Sometimes you wait three hours when you are sick. There is a danger of spreading of measles—in Calais, the bigger camp close to us, there is a confirmed cases of measles. ... Besides this, the hygienic conditions are horrible, the perfect breeding ground for any kind of disease, there are many rats. If you go out at night you see many rats on the ground and they are big as a ‘Kanickel’ [a large European rabbit].”

Though temperatures often drop below freezing, people sleep in thin tents set up in thick mud, amid trash and feces. Refugees get insufficient food and only rudimentary medical treatment, and often contract diseases, such as pneumonia due to the cold. Infrastructure is improvised and inadequate, with only 32 toilets, 48 showers, two places with clean water, and an unreliable power line.

Joel said, “They [MSF] provide infrastructure, yet there  could be more infrastructure to make sure that people have decent tents and heaters in the tents. But mainly I think it’s the officials who make appropriate assistance impossible by restricting what comes into the camp. For example, police block the road.”

While the city of Grande-Synthe initially tried to dispose of waste to contain the rat infestation, the French state not only refused to improve the conditions at the camp but has stationed police at the entrance to block the arrival of tents and construction materials.

Joel said the camp is “growing every day, but also people are leaving because the conditions are so horrible—people try to find other ways. Some people went to Belgium and every day people try to go to England. Most people are stuck in the camp because they don’t see any prospects for themselves in France. Even if France would offer them asylum some say they wouldn’t like to stay. I’ve asked those people, ‘Why can’t you just stay in France? Why do you risk your life and the life of your family under these horrible conditions in this camp?’ They tell me how people come back from the asylum centers in France with horrible stories of how nobody takes care of you. There are no prospects for these people in France.”

Joel described altercations between the police and immigrants at the camp: “They [refugees] get checked at the entrance. … Sometimes they make fun of the refugees. For example they wouldn’t let refugees bring the firewood into the camp while it was pouring rain. If the firewood is too big, they say it could potentially be used as construction wood. So the refugees had to saw it into small pieces in pouring rain while the police were making jokes about them.”

Discussing why refugees are fleeing their countries, he said, “I think it’s because the war has been going on for many years and the conditions have been bad for so long. I think what happened is that they kind of lost hope for a better future in their country.

“Many of them were internally displaced, and others were in neighbouring countries such as Lebanon, Turkey and Jordan. They were always hoping that the war would end and then they could return to their homes, family, friends, and their regular lives, but I think it switched at some point and they realized it’s not going to happen. More and more parties and countries got involved [in the war] and I think that triggered this wave. Suddenly there was this Aufbruchsstimmung (atmosphere of departure).”

The camp is along a highway where trucks stop. People attempt to reach England, which reportedly accounts for some of the recent migration to the camp.

After the recent flood of refugees into the camp, the municipality of Grande-Synthe and MSF are planning to build a new “legal” camp. According to MSF, this camp will provide 500 tents, “each big enough for five people”, as well as toilets and showers “in sufficient numbers” (126 toilets and 66 showers), designed to accommodate 2,500 people.

Immigrants are afraid to be registered in the new camp and largely oppose a move. The French government has already established a camp with bio-metric controls and surrounded by high fences in neighboring Calais, to justify launching the destruction of the existing Calais refugee camp.